The Korn Ferry Tour Championship Presented by United Leasing & Finance will be contested in Newburgh, Indiana over Thursday, Sep 1 – Sunday, Sep 4, 2022. This tournament is the culminating event of the combined 2021-2022 Korn Ferry Tour Season. 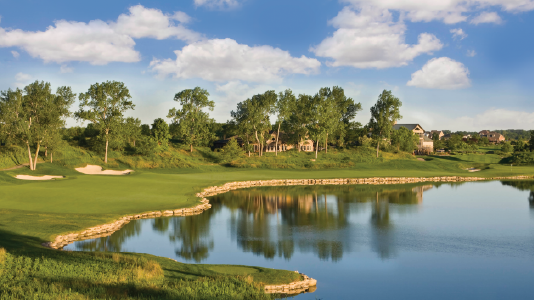 The United Leasing & Finance Championship’s inaugural event took place in June of 2012 at Victoria National Golf Club. The vision to bring a high profile golf tournament to the region was the vision of Ron Romain, President and CEO of United Leasing & Finance. The event also marked the first tournament contested under the umbrella sponsorship of Web.com. Web.com replaced Nationwide, the Tour’s former sponsor, on Tuesday of tournament week in Evansville.

In its first iteration, over 10,000 spectators endured triple-digit temperatures to catch a glimpse of Indiana’s first champion. At the end of regulation on Sunday, two players found themselves tied for the lead – California native, Peter Tomasulo and Sweden’s David Lingmerth. The two battled for three holes before play was suspended due to thunderstorms in the area. After a 25-minute delay, the duo returned to the course. Tomasulo two-putted for par on the forth playoff hole to pick up his third career win. The win was particularly special for the then 30- year-old as it came in only his third start of the season and was the first since he’d been out battling a litany of injuries including a broken bone, stress fractures in his ribs and two surgeries in early 2012.

In 2013, the United Leasing & Finance Championship extended its streak of bizarre final days as Ben Martin, Ashley Hall, Billy Hurley III and Joe Affrunti ended regulation tied at 11-under- par 277. Like the previous year, storms came into the area, this time lasting upwards of four hours, pushing the playoff to Monday morning. Clemson University graduate, Ben Martin, earned the win with a two-putt par on the first extra hole, collecting a check for $108,000 and moving from No. 21 to No. 3 on the money list. Martin would go on to earn his PGA TOUR card at the end of the 2013 season and later picked up his first win on the PGA TOUR in 2015 at the Shriners Hospitals for Children Open. The playoff is still tied for most players in a sudden-death playoff in Tour history.

In the event’s third year, it was England’s Greg Owen who took the title, coming from seven strokes off the pace in the final round to earn his first title on Tour. Owen overcame a triple bogey on the opening hole to finish the round with a 5-under- par 67, moving him to 9-under- par 279 for the tournament. He then waited nervously as the final threesome (Mark Hubbard, Tony Finau and Andres Echavarria) each took turns holding the lead before eventually collapsing. Owen earned his PGA TOUR card at the end of the season, finishing at No. 14 in the Web.com Tour Finals.

The tournament moved to April in 2015, allowing for more favorable weather for the eager crowd at Victoria National. Louisiana State University alum, Smylie Kaufman entered Sunday with a four-stroke lead after shooting a course-record- matching 8-under- par 64 on Saturday. The rookie went on to win the tournament by five strokes, defeating Jonathan Randolph, Adam Long and Ryan Spears. The win came in Kaufman’s sixth start and moved the Alabama native to No. 4 on the money list. Kaufman would go on to earn his PGA TOUR card at the end of the season and win the Shriners Hospitals for Children Open in his first event of the PGA TOUR season.

The fifth episode of the event came in 2016 and history was made once again as Seamus Power became the first Irish winner on the Web.com Tour. Power posted the only bogey-free final round to sit in the clubhouse at 12- under-par 276, watching as the last two groups played the final holes at Victoria National. Roger Sloan and Cody Gribble overtook Power with two holes to play, but ending bogeys for the duo brought Power his first Tour trophy in his 33rd career start. The win was Power’s first top-10 finish of the 2016 season and set a tournament record that still stands today. The performance earned Power a PGA TOUR card.

On a windy Sunday, South Korea native D.H. Lee became the event’s sixth champion and its third international winner. Lee entered the final round with a one-stroke lead and despite posting a 2-over- par 74, ended the tournament one stroke ahead of the Web.com Tour’s career-wins leader Jason Gore. The win was Lee’s first on TOUR and came in his 37th start.

The inaugural Korn Ferry Tour Championship Presented by United Leasing & Finance was contested over Labor Day Weekend in September 2019. This unique “Monday Finish” would prove to be lucky for Englishman, Tom Lewis. In his first career Korn Ferry start, qualifying for the Finals by earning enough points as a PGA Tour non-member, he earned his PGA TOUR Card for the 2019–20 season.

Brandon Wu captured the 2020 Korn Ferry Tour Championship presented by United Leasing and Finance title with a final-round 65. Although his performance didn’t gain Wu an automatic election to the PGA TOUR, he would receive access to the 2020 U.S. Open at Winged Foot and invitations to opposite-field events on the PGA TOUR during the 2020-21 season.